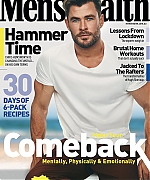 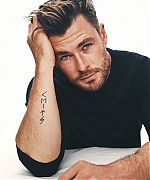 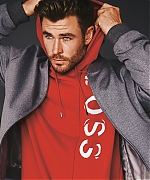 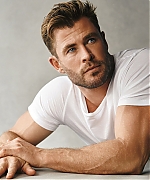 A global pandemic certainly wasn’t part of that dream scenario, yet with Australia relatively unscathed by COVID, at least compared to other countries, it’s only reinforced the need to work locally. “Lucky for all of us that it turned out that way, because I don’t think we’d be shooting these films if we’d been anywhere else,” Hemsworth says.

But while Hemsworth is fortunate to be able to work at a time when many productions around the globe have ground to a halt, the pandemic has given him pause for reflection. To ponder his life and his job and reach a crucial realisation, one that given the irresistible momentum powering his career, he may not have had otherwise: you can’t really control anything.

“I’ve spent 15 years looking into the far end of the future about what my perfect career would look like or what I want my life to be,” he says. “And then I’d get to that point and then very quickly adjust that to further in the future and you just keep missing everything. We can spend our whole lives trying to control what is completely out of our grasp. The only thing we really can control is our perspective on things.”

That’s solid advice for anyone who’s in the habit of scanning the horizon, attempting to impose your will on the vagaries of fate or shadow box with the whims of chance.

Because if you don’t stop to appreciate all you’ve accomplished, a dream, perhaps by definition, will always remain out of reach. You won’t be able to go for that surf.
At the time of writing, Hemsworth was gearing up to return to the character that has defined his career and, to some extent, his body. Yes, Asgard’s own Mr Universe entry.

You could forgive him if the thought of that prospect and the work involved elicited a certain fatigue – Hugh Jackman has talked about the drain of training for Wolverine in the past. But while Hemsworth’s finding he does need to consume more calories to support his system when he’s putting it under stress, on the whole he relishes giving his body a good hammering.

“My body shuts down when I stop working out,” he says. “I just don’t feel good. I like it for a couple of days, then everything just starts to hurt. I get achy and there’s inflammation, my back’s stiff. I’m just well aware that in order for me to live healthier and happier, I’ve got to keep moving.”

Imperative as it may be for his physical and mental wellbeing, however, one of the reasons Hemsworth is able to sustain his enthusiasm for training is that he’s constantly mixing things up, looking for things he actually enjoys.

“I speak to plenty of people who are like, ‘Oh, I just hate training’. I’m like, ‘What do you do?’ ‘Oh, I just run. But I just don’t like running’. I’m like, ‘Don’t run then!’ I don’t run. I do a lot of different things. You’ve got to be an explorer in the world of fitness and exercise and constantly be on the lookout for something fresh.”

In that respect, you could say Hemsworth found a new fitness frontier recently, working with UK adventurer Ross Edgley on the National Geographic documentary Limitless.

“His whole motto is to ‘Smile in the face of adversity’,” Hemsworth says. “He lives and breathes it. You won’t meet a more positive person, especially in a space where you’re physically and emotionally being battered. He’s just an animal.”

Interestingly, Edgley managed to teach Hemsworth, someone who knows his way around the iron, a thing or two in the gym.

“I felt like I’d kind of seen and heard it all,” he says with a chuckle. “And I start training with him and your whole world’s turned upside down.”

In the lead up to Thor: Love and Thunder, Hemsworth, Edgley and trainer Luke Zocchi, set about ramping up intensity to another level again. “We’re shocking the body beyond where it’s been shocked before,” he laughs.